Above The Firehouse is a podcast and vidcast that is a look into all things, Disney.

Hi, my name is Tony.  I found out about podcasts while on a website back in late `06 that was a tribute to an old attraction I used to ride as a kid.  That’s when I discovered Window to The Magic.  I listened to it and I loved it.  I was taken back on how great it sounded.  I could not stop listening.   I then listened to Paul talk to another guy on his podcast from his computer and the other guy was on his computer on the east coast.  I emailed Paul and asked him did you record your voices on your own computers and edit the mp3 files together?  He replied back no and told me about a new software called SKYPE.  I found the link and got my own line.  I had my own site on the side for web design and hosting called Apartment A Productions.  When I was on my computer, out of the blue I get an incoming call.  To my surprise, it was Paul Barrie.  I answered it and at the time I never used Skype and only had a webcam and used that for a mic.  I answered and it sounded like I was talking to him while he was on his podcast.  We talked for a long time and eventually, a friendship was made from it.

I told Paul I made a DVD of the Disneyland 50th ceremony.  I sent him a copy and he liked how it was made.  He asked me if he could sell it in his store.  I was ok with that because I had his 50th fireworks DVD that I got from eBay.  He then talked about it on his podcast and we sold it in his DVD store.

I had source audio from the original Submarine ride that was closed at the time.  After some research, I found some software to record a small segment.  I wanted to give it a try.  I loved it, so I asked him if I made something for his podcast would he play it if he liked it.  He said yes.   I sent it to Paul to get it played on his show.  Well, it never got played for 3 months.  After bugging him he did eventually play it.  I made a few more and well, they never made it on his show.

I then said I am going to do my own show.   I told Paul this and asked him what did he thought.  He was all for it but he said there is a bunch of other Disney podcast out there so don’t do what they do.  Do something different to stand out.  Great well I had one problem.  I couldn’t come up with a name.  I asked him if I could do a contest on his show and have his listeners name the podcast.  I had loads of names sent to me.  I got to meet Paul in early May `06 with the wttm crew, and there we would pick the name of the podcast.  We liked Above The Firehouse the best and it was announced on his show.  The rest is history.  YOU CAN WAKE UP NOW! hehe 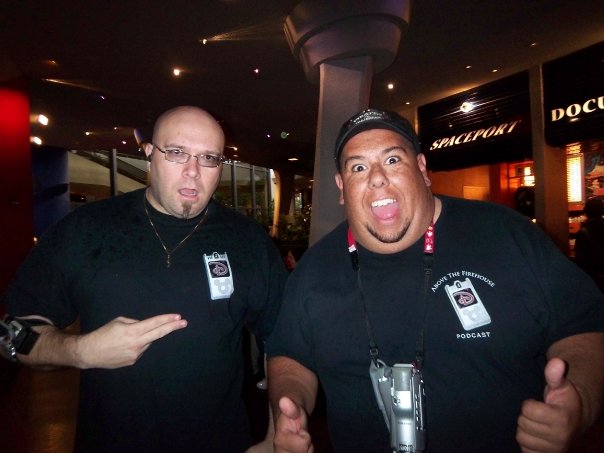 Jason joined the podcast crew in 2008. He has fresh ideas that he does for his videos.

We use cookies to ensure that we give you the best experience on our website. If you continue to use this site we will assume that you are happy with it.AcceptPrivacy Policy